Once again, the streets in Europe have seen mass protests against the integration of migrants that come to the shores of Europe. We are led to believe that it is in the pursuit of a better life. But what happens when that pursuit becomes deadly?

The ex-communist town of Chemnitz saw anti-immigration protests between far-right nationalists and leftist protestors that has once again opened the debate of whether open borders is harming the destination country of these immigrants. Duestche Welle reported that somewhat peaceful show of concern between the two groups, descended into violent protests, with men in what has now become customary black hoodies, face masks and black glasses. On one hand the far-right with German nationalist agenda. The other, standing up to the, what they see in their eyes as being Nazi ideals.

Reports have come in that there were casualties on both sides after fireworks, bricks and bottles were thrown at each camp. People are putting themselves into a position of harm in order to stand up for their morals. The ideologies that these people believe in are getting more and more extreme by the day. This whole, open borders idea just is not happening the way that people expected it to go. A spokesman for the German government, Steffen Seibert told reporters in Berlin that “What happened on Sunday in parts of Chemnitz and what was recorded on video has no place in our country”. He went further to say that “people ganging up, chasing people who look different from them or come from a different place… is something we will not tolerate”.

I ask you this then. What of the gangs of these immigrants that run around chasing citizens, terrorising them? Does it make it ok for them? Because they are in a worse off position because of the hardships that they have faced in getting here? If this is allowed to go on, immigrants continuing to lack the necessary integration skills that are required of them. Then the far right will continue to grow in support. In part down to the fact that migrants from other countries can roam free. Yes, the leftist liberal governments of Europe continue to brush aside these incidents as purely one-off cases. Obviously, this is not the case. More and more reports of violence hit the tabloids day after day.

Ill tell you the reason why Germany will not do anything about the rising immigration violence. It is because their chancellor is in the pocket of George Soros. Yes, she runs the country. But who really pulls all the strings? As long as the elitists of Europe are able to buy influence. There is always going to be violent outburst like what was seen in Chemnitz continuing right around Europe.

My question to you is this “If it was your lives that were being affected by the growing migrant population. Would you stand up and do something about it? Or just let it slip by the way side? 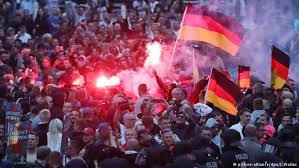